Sometimes you get surprised by a river that you thought you knew. Doug and myself both had Friday off, so of course we had to go fishing, like there is anything else to do on a day off. The Clinch was again blown out and I had just been up to the South Holston and needed to try something else. On a whim we checked out the Caney Fork generation and to our surprise the generation schedule looked great. We had not been on the Caney since early spring, so it seemed like a logical choice.

Steve Sylvis had recently been up in Knoxville, we had wanted to fish the Clinch, but it didn’t happen, so we ended up in the mountains. I gave Steve a quick call on my way home to pick his brain about floating the river. Steve runs Xtreme Trout and is probably one of the best guides on the river. Well we lucked out and Steve agreed to meet us and fish! Sweet! there is nothing better than fishing with a great friend and guide on his home water. The generation was such that we needed to meet very early to get ahead of the water. This required a 4am departure time from Knoxville. Doug gave only a few grunts and grumbles when I told him what time we were going to leave.

We arrived at the boat ramp about 25 mins early. We were scheduled to meet Steve at 6am, I always try to be early for fishing trips, it doesn’t always happen, but when you are meeting up with someone that has agreed to show you the river at no charge, early is a good thing. After dropping the drift boat in and running a quick shuttle, Steve hopped on the sticks right off the bat and I lucked out with the front of the boat and Doug took the back. After pushing off the boat ramp we immediately started sticking fish. I had a grand slam within my first ten casts and not more than a hundred yards from the ramp! I thought to myself that this could be one of those days for the record books, but kept my mouth shut, not to jinx us.

Within thirty minutes Doug and I must have landed twenty fish on dry dropper rigs. We were catching mostly smaller fish, so I decided to switch over to a small streamer in hopes of catching something a bit larger. After a few quick pointers from Steve on my streamer stripping methods, I was hammering them. After three fish to the boat, Doug was giving up his dry/dropper for a streamer as well.

We continued to fish streamers until the water came up. They were doing a two hour pulse and we pulled the boat over to wait out the water and eat a little lunch. My wife had made some killer brownies the night before and I had a sweet tooth to satisfy. After lunch we noticed a few fish rising here and there, but nothing crazy. Then underneath some over hanging trees we all spotted a pretty decent fish rising.

We rowed over to get in casting position with our dry dropper rigs. First cast I missed him and it looked to be a good sixteen to seventeen inch Brown. Then Doug missed him and finally I farmed him one last time. We backed off to rest him for one last shot, then I noticed another fish farther up under the tree, which seemed to be a bit bigger. I retied with a rubber legged parachute hopper and botched the cast really bad, however this brown materialized just as I was picking my cast up and he bum rushed the hopper. We all freaked out, this was not the fish we had been casting to, he was much bigger. I of course pulled it away from him. After resting the run a little longer I threw a better cast up under the tree again and gave it one twitch. That twitch was the key and the behemoth rose and ate the hopper! This time I was on point and fish on!

I had done everything right up to this point, but then I realized that I had just stuck my largest fish on a dry fly and I was fishing my 3wt Helios mid-flex! I came out of my haze and hear Steve telling me to take it easy, take it easy. The monster then decided he wanted to make a run and do some huge head shakes. With that the hook slipped loose and the line went limp. We all looked at each other, jaws dropped to the bottom of the boat and asking each other if that just really happened.

Okay so I just lost my largest ever trout on a dry fly. Wait, what river are we on? Oh, the Caney Fork. What fly did he eat? A hopper. Really, did that just happen? Yeah!

So the excitement was over, right? Wrong, we dropped down just fifty more yards and again found rising fish in the trash line right along the bank. Doug throws a para-adams, no luck. We start to move farther down stream and I throw a long cast up to where Doug had just been casting and Wham! Fish on, a big Rainbow. This time I was bound and determined not to loose him. Not this time brother, fish in the net! By this time we were absolutely freaking out. Steve said it was his second largest rainbow to the boat that had not been caught on a streamer.

“So, Doug do you want a rubber legged para-hopper,” I asked? “What do you think” was his reply. Doug’s first cast and bam! big brown on. Yeah, hopper fishing! There were a couple points when I thought he might loose the fish, but not this time. 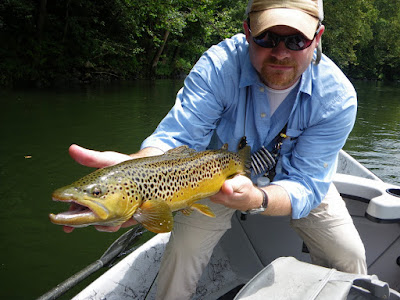 Doug’s second cast, slurp, yes another fish on the hopper, this time another big rainbow. Seriously are we still on the Caney Fork, is this really happening? 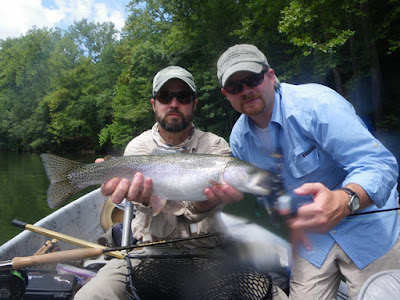 After all of this commotion we did not see any more fish rising, so we floated on out. I don’t think any of us cared if we caught another fish all day. We had already had one of the best days imaginable, and left content.

I’d like to give another shout out to Steve, he is one of the best guides I’ve ever been in the boat with. Check him out at Xtreme Trout