It has been almost two weeks since my last fishing trip. That last day of work was brutal. All I could think about was fishing the next day.

The Clinch was back to running a favorable generation schedule for floating. Doug and I met up around eight in the morning and got on the water at about nine thirty after running a quick shuttle.

We started off with the normal dry/dropper rigs and caught a good number of smaller fish. Once we got down to the first set of riffles we switched over to a double nymph rig. The fishing wasn’t gang busters, but it was consistent and we would land or hook a good fish fairly consistently. 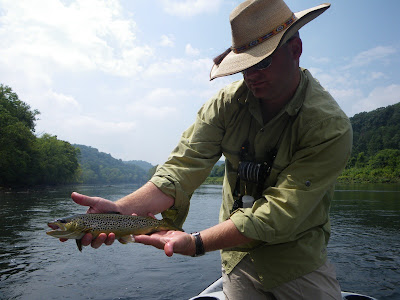 Later after dropping over one of the better shoals in the river, we anchored up the boat and got out for a little wade fishing. We were both wet wading and although the Clinch is very cold, it felt really good to cool off and get in the water. I kept with my double nymph rig and fished some faster water right below the main drop off and stuck six fish.

I am always amazed out how slow you can get the indicator to drift in heavy current with proper mending and line control. There are so may little micro eddies throughout a run. I don’t think “micro eddy” is a real term, but I hope you get the idea. It is usually when I find these slightly slower areas in heavy current that I pick up fish. 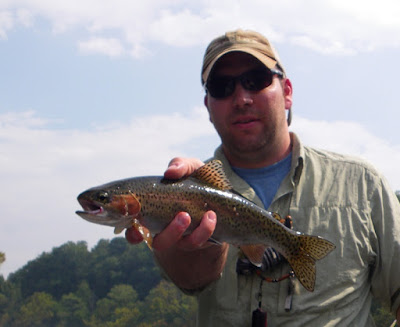 Shortly there after the water began to rise and we caught a few more as we floated with the rising water. All of these were really good fish. We were just floating with the current and every ten minutes or so we would have a fish eat. It doesn’t get any better than that. It reminded me of fishing on the Big Horn river and a few of the fish must have thought they were on the Big Horn, because they would pull like a freight train. 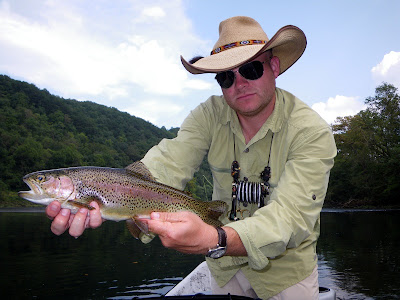 The next day, Wednesday, September 9th we headed up to do a little wade fishing, instead of taking the boat out again. On the way up Doug had to stop by CR Outfitters and talk to Cal. We ended up talking with Cal for almost an hour. He has got some great stories about the Clinch and has been fishing that river for a very long time. If you have a question he is definitely the guy to ask. Check them out atCR Outfitters.

Back to the fishing, so we got on the water a little later than we had hoped. we started right in front of the church and fished our way up to the second island. I picked fish up on Hickey’s Auto Emerger, Black Zebra Midges and a Pheasant tail pattern that we tie up. The rig I was using was a double nymph rig with the top fly tied off of a tag and a yarn indicator. I really like using yarn now, as they seem to be more sensitive than the others. If you watch me fish you will see me set the hook a lot. I’m not necessarily seeing the indicator go under, but just hesitate or a movement that I was not expecting, so I set the hook. Sometimes it’s a fish and sometimes it is not, but you won’t know if you don’t try.