Troutfest 2011 is complete.  I’m not sure on the total money raised, but I’m sure it is as good as always.  For those of you that are not familiar with Troutfest, check it out at Troutfest.org .  In my opinion it is one of the coolest fly fishing festivals in the United States.  Where else can you sit besides Lefty Kreh and Joe Humphrey’s while you all watch a kid from Knoxville, TN tie flies of his own creation.

I may be a bit biased as I sat on the planning committee for 2009 and 2010, but trust me it is awesome.  The event is a result of the Little River Chapter of Trout Unlimited.  Most people don’t know, but Joe Hatton (former lrctu chapter president) was one of the driving forces for getting the event started 8 years ago.  Since then, Byron Begley of Little River Outfitters ,has helped to grow the event over the last three years to where it is today.  In 2009 and 2010 the event grossed around $60,000 each year and donations of around $45,000 were donated to Great Smoky Mountain National Park both years as well.  Not bad for an event ran by volunteers.  I must give a hats off to all of them as without them it would not be possible.  There are probably around 100 volunteers each year that donate thousands of hours of their time to make the event a success.  It is truely a special event.  The feeling you get when attending and walking around is awe inspiring.

Also, without the sponsors and exhibitors the event could not happen.  Here is a link to the Troutfest 2011 sponsors list.  We also get donations from many of the fly fishing industry manufacturers for our auction as well as attendance by all of the regional fly fishing industry manufacturer representatives; Randy Hamilton, Park Burson, Steve Burkhalter and Kent Edmonds to name a few.

One of my favorite stories is from two years ago when I had rented a cabin on Little River for the duration of the event.  I was waiting for my wife to arrive so we could attend the banquet.  There happened to be a swinging bridge just out from the cabin and I was enjoying the day and weather.  Just down from the bridge was a gentleman fly fishing.  At one point he looked up and asked the time.  His voice and face was oddly familiar and I figured that it was just one of my occasional fly shop customers.  However after second glance I realized it was Joe Humphrey and he was fishing 20 minutes before he had to be at a banquet, where he was a special guest!  I realized it is still just about the fishing and we all share that same passion.

This year was another great moment.  I have worked for the Orvis company as a Fishing Manager for 5 years now.  I’ve had the opportunity to talk to many of the people that helped to build Orvis to where it is today.  Perk and Dave Perkins, Jim Lepage as well as many of the rod designers and product developers.  These conversations are usually in some sort of work setting or after hours cocktail meet and greet.  I doubt that any of them could recall our conversations.

However this year I had the opportunity to hang with a person who truly helped to develop me as a fly angler.  That man is Tom Rosenbauer and he as written many of the books that most of us read when we were just getting started or trying to take our angling pursuits to the next level.  He has developed fly patterns and created one of the most downloaded pod-casts ever and has worked for The Orvis Company for over thirty years.  You can find more out about Mr. Rosenbauer in an article by Fly Rod and Reel, Angler of the Year.  He is a true steward of the sport of fly fishing, but you won’t hear him saying that.  It was cool to sit and talk with both Tom and Joe Humphrey at the same time.  Joe, who is also of one Tom’s fly fishing hero’s has attended Troutfest for the last three years along with Lefty Kreh and Bob Clouser.  All of these men are living legends in the fly fishing loop.

So, this year was a true treat when I was invited along to go fishing with the gang.  Robert Bryant, Southeast Representative for The Orvis Company; Clay Aalders, Owner of Smoky Mountain Gillies and Tom Rosenbauer.  Clay took us to one of his favorite stretches in Great Smoky Mountain National Park.  It was a rainy dreary day, but those are some of my favorite conditions to fish in.  The fishing was a little slower than normal, but it didn’t matter as you could sense that everyone was just there to have a good time.  Later in the day we moved to lower Little River and fished around the Metcalf bottoms area and had some great success.  I spooked one of the parks legendary monster Brown trout (yes, I will be back to see him during the next big rain with Mr. 7wt and a big ugly).  Everyone in the group also caught some really nice fish on dry flies none the less.  We fished till dark and left with smiles, all happy to have enjoyed one this nations great and beautiful places.

This past week I had the honor to take one of the legends in the fly fishing industry, Bob Clouser and his business manager, out smallmouth fishing on the Holston River near Kingsport, Tennessee. The weather conditions and water temperatures were not at their best for this float trip, but after getting in tune with the fish and river we were into some nice smallies throughout the day. The water was 49 degrees when we started and there was a cold rain. Trying several colors of flies in one of the better pools on the river gave us a quick answer the the color the smallies wanted, chartreuse. They took these flies aggressively. As you can see it was a day of good sized hard fighting fish. Not only did we get smallmouth bass, but we got some nice largemouth bass in the mix. 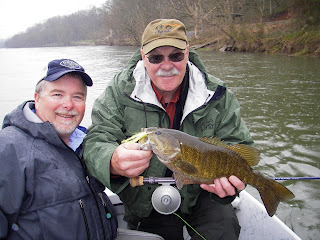 Getting the call to take such a legend out on the river makes you nervous and you over think everything leading up the the day of fishing. Bob Clouser is such a down to earth person that he puts you at ease quickly and just wants to be one of your good friends out on the river for a day of fishing. To watch him work the fly rod and flies was a excellent learning experience for me as well. I am a good guide, but there is always room to learn more and Bob is an excellent teacher. He showed me some things that I had been overlooking and this will make me a better guide and my clients will benefit from this as well.
When you come to Troutfest or any other event where is is in attendance, go talk with him and thank him for his contributions to our sport. I am glad that I can now call him a friend and fishing buddy. 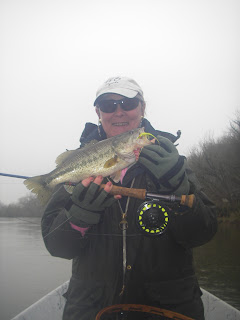