The generation on the Clinch has not been the best this year due to very high water.  In addition to work, I have also been working on my MBA through Tennessee Tech, which has limited the amount of fishing that I’ve been able to do.  So this last weekend was a great treat.  I had worked all Memorial Day weekend, so I managed a five day weekend off.  Also my mother and father were going to come down on Friday, Saturday and Sunday.  The plan was for my father and I to fish on Friday, so I figured I should do some pre-fishing on Wednesday and Thursday, as a good son should.

We are also in the middle of heat wave so I opted to only fish for about six hours or so in the morning so that I would be off the water by noon and could get some things done around the house the later part of the day.  Oh the joys of home ownership and having a beatiful yard of clover!

On Wednesday I fished by myself out of the drift boat which is not really the easiest thing to do.  Trying to man the oars, control the anchor and cast to rising fish while floating down a moving river is somewhat complicated.  The best way that I’ve found is to cast way infront of the boat then drift with your fly while you have the rod proped up with your feet.  Also, of course you can anchor up in good riffles and fish them the way you normally would.  Just a note, but landing bigger fish from a boat with a 9′ 4wt. and 6X tippet by yourself is a little tricky, make sure you have the big net.

The conditions Thursday were going to be the same as the day before, but this time I had two friends that were coming along.  Mike and I had fished together before, but David the other gentleman had not fly fished in over fifty years.  I really wanted to get David on a fish, but it was great to hear his past fishing stories also.  I wish I could go back in time and fish some of the places I fish

today before they ever became popular.  Some of them wouldn’t probably exist, but others would be lights out.

The fishing Thursday was pretty good and really heated up during a one hour pulse that came through.  I think that little bit of increased flow really makes the trout happy.  We landed some nice fish and lost even nicer ones, but that’s how it goes.  If I landed every big fish I hooked, what fun would it be.

On to the last day, Friday, again the conditions were pretty much the same as the last two days.  We opted again to fish in the morning as to get off the water before the heat set in.  My father has only done a little bit of fly fishing and not caught much.  Today however was a little different.  We caught some good fish early in the day, but the highlight was the one that got away.  Towards the end, my dad hooked a monster Rainbow Trout!  We fought it for a good bit, but right at the end the big Rainbow  made one last ditch dive under the boat and spit the hook.  So goes it, but I’ll be back.

The Clinch is fishing good and the river really seems to have some great fish in it right now.  We caught all of our fish on Split Case Sulphurs size 16 and 18, Black Zebra Midges size 18 and 20 and Bead Head Pheasant Tails 14 to 18.  If you are needing a guide for the Clinch check out the following CR Outfitters and Smoky Mountain Gillies.

I’ve fished the Clinch six times in the last month and it has been fishing great! We’ve managed to catch good numbers and land a few respectable fish each trip. The menu has been made up of sulphur dries, split back sulphurs, pheasant tails and sow bugs in sizes 14 to 18. Most days We’ve kept the same size 16 split back sulphur on till it is literally shredded. Dry/dropper rigs or two nymph rigs with yarn indicators have been the name of the game. Once the sulphurs are done I’m sure it will switch over to more midges and standard tailwater fare. 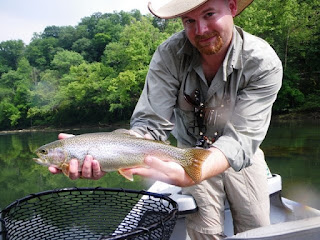 Doug and I have floated Peach Orchard to the 61 bridge twice recently and fishing was spectacular. There is some really great water throughout that float. We landed fifty or more fish on each float. Both times we only made it about three fourths of the way before the water came up and pushed us out. There were only a couple places that get a little tight in a drift boat, but nothing unbearable and we had to get out once because we took a wrong turn around a shoal. I’m really looking forward to seeing the entire stretch on low water and really learning this river. 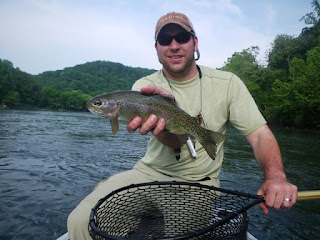 Mother nature did not seem to want to cooperate with us today. I awoke to rain at 6:00am. Rain however does not always mean bad fishing, in fact it was just two years ago when Doug and I fished a miserable rainy day that resulted with my biggest brown ever. With that in the back of my head I was ready and at the loft to meet Doug at 6:30am. After running to get the boat and pick up doug we were in route for the Watauga, trying to catch some of the experience that we had had last week.

When we finally got to the river to drop the boat in it was still pouring rain. The river was a bit cloudy, but not bad and we hoped the mud would hold off for the float. I was feeling good when after just five minutes we were hooked up with are first two fish of the day.

With the skunk off I moved the boat down to a good riffle that Doug and I knew held fish. They weren’t taking what we had at first. I re-rigged to a soft hackle pheasant tail and a mayfly emerger pattern that had been burning a hole in my fly box for almost three years. I picked the pattern up on a visit to Jackson WY and hadn’t used it since. However after seeing a pattern that Steven was fishing last week, it perked my interest again.

First cast, I hooked up! Great, we’re onto them. Eric’s first drift, fish on! I was now getting excited thinking I had them. Unfortunately a few more fish and they turned off. What the heck happened? I guess we just managed to catch all of the dumb ones.

The next good run drops off of a steep gravel bar to the left. After droping down it had hammered the boat into a small back eddy. Eric began casting to a good seem and instantly a good fish hit. Okay I though, we’ve found them. Not quite. The fishing slowed a bit and I hopped out of the boat to fish a side channel. Three fly rods at once get a bit crowded. I picked up three fish, but nothing of any size.

Getting back to the boat, I reassessed the situation and once again re-rigged with longer leader and more shot. It payed off with a nice fish once again.

By this time the water had got quite a bit muddy, We picked up a few fish here and there, before switching to a streamer. I had a few follows, and turned it over to Doug, so I could eat some lunch. Doug immeadeately started getting follows, but few hookups. That is usually how streamer fishing goes. The fish has to really want it, and when they do look out.

Doug picked up some really nice fish on streamers and we managed to salvage the trip.