Saturday started out like what seemed to be any other day on the South Holston. As my best friend and fishing buddy cruised from Greeneville towards the river, we were full of excitement and nervous energy. Knowing that all the other streams in the area were gonna be off limits for the day, the South Holston offered two trout bums the chance to float high water, deep nymphing the clearer upper river then swapping over to big nasty streamers in the deeper darker water.

When we got to the launch at Emmett Bridge our hearts sank. There were so many boat trailers in the parking lot that after we launched I rowed across the river to pick up Jake Mullins, from the parking lot at the grates.(which itself was nearly full of raft and drift boat trailers) Once on the water Captain Jake guided his Clacka in and out of boat traffic. A lot of our prime spots already taken and boats waiting to take them again. So I was forced to nymph fish other seams and holes that weren’t as familiar to me. I was running a 9ft 5x leader with a huge SG shot nearly 10 inches above a Cream colored caddis larva. Below the rock worm hung a SZ 18 pheasant tail, which seemed to work well in the upper part of the river. Pulling a few fish on board and watching countless others disappear as they flashed as if t

o say “goodbye boys you should have been watching that indicator, instead of telling that tale”.

After we floated past the cul-de-sac my streamer itch just had to be scratched. So I asked Jake to hand me the “big stick”! The 7wt Hydros was ready for deployment. I had chosen a super nasty Kelly Galloup pattern, that we had picked up last July in Wyoming. After the Galloup’s TA Bunker went to work, Jake and I were back where we seem to be every weekend, chucking big nasty streamers to our East Tennessee brown trout. And within minutes it paid off! Two fish swirled and refused the pattern before a nice, solid browny took the fly. We were like two little kids with a new toy, and the dark deep streamer water had just began. A nice 18 incher inhaled the Bunker just off the bank above Rivers Way. After a 20 minute fight in heavy current, and a boat chase that ended just upstream of Hickory tree bridge, we had another but quite a bit larger sample of the South Holston’s brown trout population in the net.

After floating past Jack Prater’s house, Jake couldn’t take it anymore. He gave up his seat at the oars, which I gladly took, after my morning I was perfectly content to row the Clacka the remainder of the day. He swapped the fly for the soon to be famous “trashy pole dancer” patent pending. And we were amazed as brown trout gave chase to this brain child of Jake’s that had worked beautifully a few weeks before on the Watauga river. After a few short strikes, and tons of interested but wary fish, Jake went back to the bunker. The solitude of pre-spring on the river was shattered by a shout from the front of the boat. “HOLY @!#$”, I sank the oars deep and pulled back hard to try to slow the boat as the hydros bent double! No sooner than we realized what had happened….. the leader snapped. And we stared helplessly as one of the largest brown trout I have ever seen, slipped backwards into the depths of the dark water. Shaking his head side to side with the Bunker inside his mouth. Jake quickly said “Hurry dude I need another one”! I replied, “Man I think that was my last one”. After a desperate gear search we managed to find one more Bunker hidden in a secret stash, well used to be secret stash in my boat bag.

He fished the Bunker hard for the rest of the float. Fighting the strong wind and the nagging taunts from his oarsman that kept reminding him of the one that got away. A couple of very nice brown trout later, and countless curious fish that wouldn’t fall for the bunker, we arrived at Rock Hold. Which was our scheduled take out for the day. However the excitement was far from over! A snapping turtle had decided to make the ramp his place of choice, to soak up the last few rays of sun, before the shadows took over the river bank. After a few fun snapshots and stories of the monster still lurking in the depths, we decided that it was time to travel back to Greeneville.

Days on the river are always an adventure. Whether it be mother nature or swarms of fishermen instead of flies. Sometimes the obstacles that we look at as a challenge, force us to explore other sides, seams, and parts of the water. A beautiful day with a friend like Jake, will always be a joy. And a friend as crazy about the sport as I am makes it easy to always find a reason to hit the water. I am reminded of a famous quote that seems to sum up all the excitement and wonder that March Madness on the South Holston brings. “Perhaps fishing is, for me, only an excuse to be near rivers”. -Roderick Haig-Brown-

Not every day on the water can be great.  Some days it is just nice to be out in the sun, floating down a river.  Other days you can have horrible conditions and the epic fishing makes it unforgettable.  Those are the days that keep us going back.  Sunday was one of those days.  It rained virtually all day.  It was a classic Blue Wing Olive day, overcast and rainy.  Not too much rain that you couldn’t fish but just enough to keep things interesting.

The day started out with a little nymph fishing.  We were using  a big pheasant tail and midge dropper under an indicator.  The water was a little stained so we went a little larger on our fly size than we would have normally.  Once the rain started, the blue wing’s began to hatch and we switched over to dry dropper rigs, using a split case bwo as our nymph.  It was pretty easy picking off fish and the rain allowed us to get fairly close without spooking them with the boat.  Jake and Clay had good luck using a san juan and midge I believe.  They also threw streams and picked up some good fish.

Towards Afternoon we watched Jake land a pig on a new streamer that he tied.  It looked kind of girly to tell you the truth.  Soon after the rain really started to pour and we all hunkered down under tree  while enjoying a few beverages and telling too many lies.  Upon starting to fish again I asked to borrow one of Jake’s girly streamers.  Then wouldn’t you know the darned thing worked like a charm!  I guess he might be on to something.  No, really Jake is a pretty darned talented fly tier and fisherman.  I am envious of his upcoming summer job also.

To sum things up, it was a grat day despite the rainy conditions and  we had a blast.  I wish every trip could be that good. 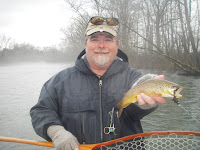 Floated the South Holston this week to check out a fellow guides new Clacka. Rowed nice and maneuvered easily through the runs and riffles.

It was cold and rainy most of the day. We were able to get them on deep nymphs, dry flies in a lighter shower, but the higher percentage was on streamers. Olive and grey Double Bunny was best for me, tried all black but didn’t get any follows.

For those of you in the Louisville Kentucky area, mark Saturday January 30th on your calendars and try to attend the Kentuckiana Fly Fishing Show, being put on by the Derby City Fly Fishers. It is a great show and I will be doing two presentations. Looking forward to seeing you there.

Thank you for reading Fly Fish Tennessee Stream Side Reports and We hope you visit again. Please Visit [url]www.flyfishtennessee.com[/url] for more information on Tennessee T