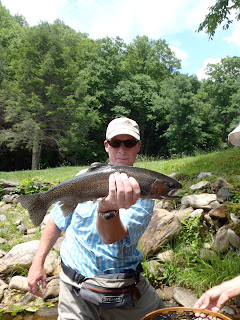 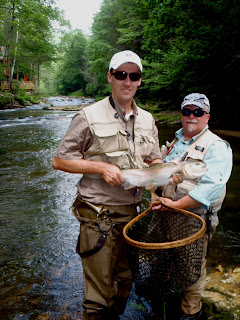 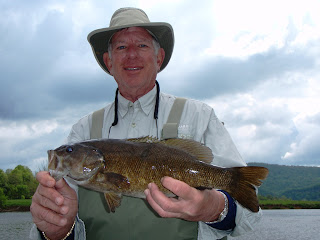 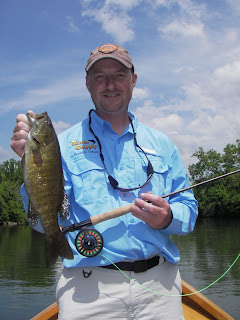 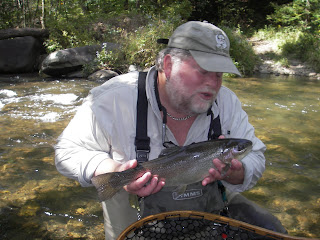 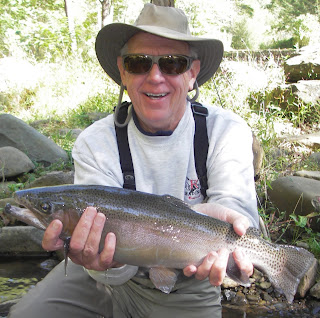 I recently took these gentlemen from Southern Indiana to fish on our new private trophy trout waters in Western North Carolina. There are two (2) miles of river on the property that is managed for trophy trout fishing. These waters are one hour from our base in Kingsport, Tennessee. These fish are currently taking size 14 tan caddis from the surface during the afternoon hatches, and the rest of the time it is size 14 Copper Johns with a size 18 red Zebra midge trailing as the dropper.
I had a blast watching them hook and land these fish in these waters. If you would like more information on fishing these waters contact me at www.trout-fishers.net . There are additional rod fees above the daily guide fee.
Thank you for reading Fly Fish Tennessee Stream Side Reports and We hope you visit again. Please Visit [url]www.flyfishtennessee.com[/url] for more information on Tennessee Tailwater fly fishing opportunities.

It had been almost a month since I was last on the water. Work and yard maintenance, have kept me very occupied. I did make some overtime and hopefully the yard will look great next spring.

While at work I had been hearing of some good reports about the fishing on the Cherokee Trophy water and I had to check it out for myself. It just so happened that Doug and two buddies from Greenville, Clay and Allen, were also able to make it over for some fishing.

Clay and Allen were the first on the water as, Doug and I had to run up stream to the KOA Campground for some licenses. By the time we made it back to the water they had already landed a few fish a piece. So Doug and I had some catching up to do. 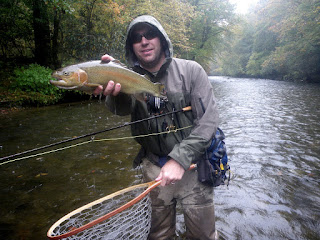 Fishing for stockers takes a different mentality. They have more than likely grown up their entire life eating trout chow/dog food. They don’t really know yet that a size sixteen pheasant tail is super yummy. They are used to seeing brown pellets rain from above and yes they are good, but tying trout chow pellets is somewhat frowned upon. Trout Chow smells of just a hint of shrimp mixed with hot dogs, not that I’d know or anything.

As Doug and I were entering the water he mentioned that he had seen some guys throwing bread off the bridge while we were rigging up. Light goes on, bread eh, flash back to Tim Doyle and myself throwing biscuit patterns to the carp underneath Calhoun’s on the River! Do I have any biscuit patterns left? Nah fresh out, size 8 Turks Tarantula should do the trick. Sure enough, first cast and I had fish trying to eat it. I stuck one right off the bat, then I couldn’t get a good hook set after. Later I looked at my fly, to find that the hook had broken. I took that as a sign from the fly fishing gods that maybe I should not put another one on. 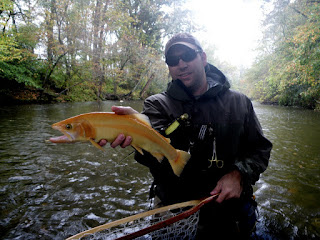 The fish had wised up to my fake bread fly very quickly. So I rigged with the old faithful Egg and Lighting Bug with a few spilt shot to get it on the bottom. Clay also had great luck with the Lighting Bug and Allen used a pink San Juan most the day. Doug started off with glo ball patterns and eventually switched to some large zebra midge patterns.

In all honesty I think it was important to use something big or flashy that would get their attention. Split shot and longer leaders were required to get the fly to the bottom and keep it there. In my experience stockers typically will not move too far for a fly so you have to almost hit them in the head with it. 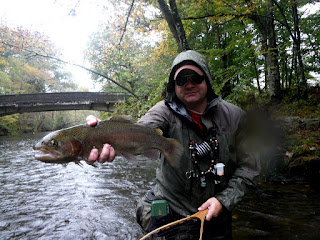 It had rained all day long. Nasty days are my favorite days to fish. One, it keeps the fair weather fisherman off of the water. Two, the fish seem happier and happy fish means hungry fish. Third, I get to wear my awesome rain jacket!

We all left for lunch around 1:30pm and got some great food at the Riverside Cafe just down the road. By the time we had gotten back the river had rose substantially and by 4:00pm it seemed to have risen a good four inches and become very stained. This seemed to put the fish down. Oh well, we had caught plenty of fish and had a blast so we packed it up and headed for Knoxville. Despite the wet conditions it was a great day fishing with a bunch of great friends. 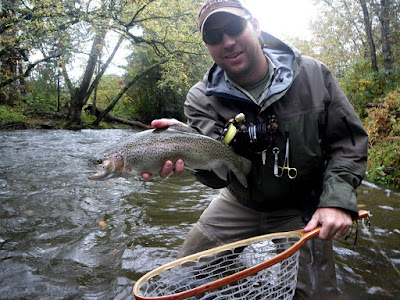