Unfortunately, fishing plans don’t always work out the way you had hoped. TVA apparently decided that they needed to produce more electricity and therefore were running two generators both Wednesday and Thursday last week. Which were the days that Steve Sylvis from Nashville was planned to be here.

I had called Steve the day before and told him that things looked bleak for the Clinch or any other tailwater for that matter. Steve is a pretty easy going guy and said it was no big deal, and suggested we fish the park. I hadn’t been in the park for a while, so it seemed like a great alternative.

Steve brought along his friend/website guy/producer/publisher, named Peter (Pete I’m sorry I already forgot your last name). They wanted to get some video footage of us fishing the park. I called Doug to come along and we now had a new plan.

Wednesday morning we headed to Greenbier. We went almost all the way up to Ramsey’s trailhead before getting in the river. Doug, as always was the first one rigged up and stuck four fish right in front of the truck. Steve and I went down stream and landed a few. While we fished Peter bounced around between us getting a little video footage. He had positioned himself on a small bluff overlooking were I was fishing and after about ten minutes I hear him screaming and he takes off running. My first thought was snake, but when I saw him swatting at his hair I new it was hornets. I went the other way around the stream to see if he was okay. Sure enough he had crawled onto a hornets nest. He said he looked down and his waders were covered with them. Luckily he only got stung four times, and wouldn’t you know it I had left the first aid kit at home. He was a trooper and stuck it out for the rest of the day. 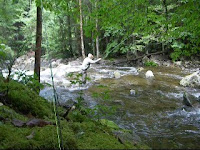 The four of us fished almost all the way up to Ramsey trailhead. Everyone caught a few fish and I learned how tough it is to film while fishing. It is also a little nerve racking knowing you have someone over your shoulder with a camera. Doug however showed us all up and seemed to do no wrong. Peter did a little fishing and caught his first mountain rainbow and brook trout back to back. Later on the way home we tried to catch a brown on Little River, but the fish didn’t cooperate. 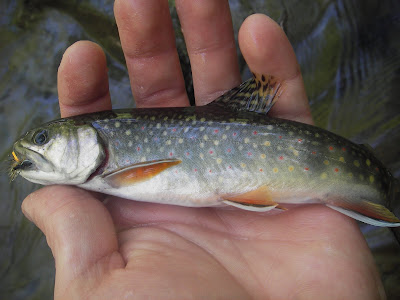 On Thursday we didn’t have as long to fish, so we headed up to Tremont for a while. The fishing was a little slower than the day before, but it was the middle of the day. I had a nice Bill Dance hook set on my nicest trout of the day which resulted in the fish getting to keep my size 16 Yellow PMX.

Both days were pretty good and it was great to just sit around after dinner and listen to Steve tell stories about guiding in Alaska last year. It sounds completely wild somewhere I hope to be able to visit one day.

Tips from the Trip: The flies that were productive were a size 14 Parachute Adams, 16 Mr. Rapidan, 16 Yellow PMX and Pheasant Tail Soft Hackles. Also longer leaders seemed to do better than a short one. We also caught a good number of fish at the very bottom of a pool.