The generation on the Clinch has not been the best this year due to very high water.  In addition to work, I have also been working on my MBA through Tennessee Tech, which has limited the amount of fishing that I’ve been able to do.  So this last weekend was a great treat.  I had worked all Memorial Day weekend, so I managed a five day weekend off.  Also my mother and father were going to come down on Friday, Saturday and Sunday.  The plan was for my father and I to fish on Friday, so I figured I should do some pre-fishing on Wednesday and Thursday, as a good son should.

We are also in the middle of heat wave so I opted to only fish for about six hours or so in the morning so that I would be off the water by noon and could get some things done around the house the later part of the day.  Oh the joys of home ownership and having a beatiful yard of clover!

On Wednesday I fished by myself out of the drift boat which is not really the easiest thing to do.  Trying to man the oars, control the anchor and cast to rising fish while floating down a moving river is somewhat complicated.  The best way that I’ve found is to cast way infront of the boat then drift with your fly while you have the rod proped up with your feet.  Also, of course you can anchor up in good riffles and fish them the way you normally would.  Just a note, but landing bigger fish from a boat with a 9′ 4wt. and 6X tippet by yourself is a little tricky, make sure you have the big net.

The conditions Thursday were going to be the same as the day before, but this time I had two friends that were coming along.  Mike and I had fished together before, but David the other gentleman had not fly fished in over fifty years.  I really wanted to get David on a fish, but it was great to hear his past fishing stories also.  I wish I could go back in time and fish some of the places I fish

today before they ever became popular.  Some of them wouldn’t probably exist, but others would be lights out.

The fishing Thursday was pretty good and really heated up during a one hour pulse that came through.  I think that little bit of increased flow really makes the trout happy.  We landed some nice fish and lost even nicer ones, but that’s how it goes.  If I landed every big fish I hooked, what fun would it be.

On to the last day, Friday, again the conditions were pretty much the same as the last two days.  We opted again to fish in the morning as to get off the water before the heat set in.  My father has only done a little bit of fly fishing and not caught much.  Today however was a little different.  We caught some good fish early in the day, but the highlight was the one that got away.  Towards the end, my dad hooked a monster Rainbow Trout!  We fought it for a good bit, but right at the end the big Rainbow  made one last ditch dive under the boat and spit the hook.  So goes it, but I’ll be back.

The Clinch is fishing good and the river really seems to have some great fish in it right now.  We caught all of our fish on Split Case Sulphurs size 16 and 18, Black Zebra Midges size 18 and 20 and Bead Head Pheasant Tails 14 to 18.  If you are needing a guide for the Clinch check out the following CR Outfitters and Smoky Mountain Gillies.

Generation is getting better and better every day. Mother nature also decided to ease up a bit on the weather. It ended up being an absolutely beautiful day. The original plan had been to float with a buddy, but that changed. He works nights and got in very late so it didn’t work out. I guess I won’t hold it against him this time. So instead I ended up driving around, looking at some new spots and hanging out at CROutfitters until the water dropped out enough to wade fish. Cal just started carrying Simms waders plus he got in a bunch of other stuff, it’s worth the stop. I like his shop a lot and he’s also got some great stories to boot.

The fishing was pretty good and the fish were all super healthy. I didn’t catch anything that big, but they were all great fish that pulled really hard. I’ve got my fingers crossed. This year could be the year to be on the Clinch. 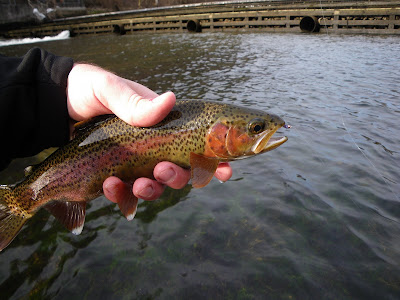 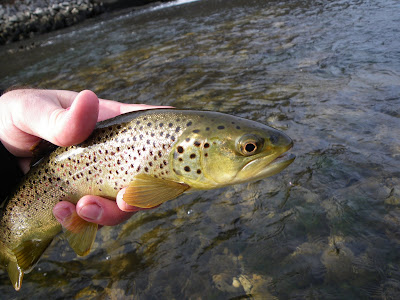